You have probably already heard about Pressure Cooking. In recent years, pressure cookers used in popular cooking shows have increased the awareness and curiosity around cooking with these appliances.

The most commonly cited benefit of cooking with a pressure cooker is efficiency, both in time and energy. In some cases, pressure cooking times are 70% faster than when using a more conventional method! If braising a cut of meat takes an hour on the stove, then a pressure cooker allows you to cook and serve it in 20 minutes.

In addition to saving time, pressure cookers also save energy. Since pressure-cooking times are a lot faster, the amount of energy used is reduced. In some cases, the energy saving can be anywhere up to 50%, dependent on the type of pressure cooker that you decide to use. How Does A Pressure Cooking Pot Work?

It is important to note that the increased temperature is not caused by increasing energy, as you would do on a stove by increasing the heat source, but rather by the buildup of pressure.

In a pressure cooker, the pressure created by the steam works in two distinct ways:

The pressure raises the boiling point. In conventional cooking, any time you cook a liquid, like a stew or soup, the heat of the fluid is limited to the boiling point of water, which is 212°F. Since a pressure cooker works with high-pressure steam, the temperature inside the pot can rise to up to 250°F. This increased heat cooks foods faster.

As you can see, a pressure cooker is not so much about raising the heat through adding energy, but instead increasing the temperature by adding pressure.

Is It Safe To Use A Pressure Cooker?

Working with high pressure and hot steam might seem dangerous, but newer pressure cooker pots are safe to use.

Modern pressure cookers have many different safety features that make them safe to use in any kitchen and even by novices.

Pressure cooker pots now come with automatic pressure gauges that keep a close eye on the pressure built up inside.

In other words, using a pressure cooker is no more dangerous than using any other kitchen appliance, provided you purchase one that is well-made and doesn’t have any existing issues. Additionally, pressure cookers come with safety lock clamps on the lid. These ensure that the appliance remains tightly closed and that you cannot accidentally open it when it is not safe.

While a pressure cooker might look daunting with its gauges, valves, and locks, it is safe to use, and modern pressure cookers are manageable, provided you have the patience to learn how.

How Does Cooking With Pressure Cooker Affect The Quality Of The Food?

A pressure cooker saves time and energy, and the science behind them is fascinating, but in the end what matters is how the food will turn out, right?

Cooking with a pressure cooker also scores many points in the taste department. Because foods are cooked faster, and no moisture is lost, the flavors tend to be better-developed and richer.

An added benefit of cooking with a pressure cooker is moisture. Since the moisture from food cannot escape in the form of steam, your food won’t get dry. This is especially beneficial when cooking meats.

Steamed food is known for its tendency to be bland. A pressure cooker adds pressure to the mix, and this changes the game entirely.

Thanks to the Maillard effect, which is a chemical reaction between amino acids and sugars, pressure cookers add a delicious caramelized flavor to foods. It seems counter-intuitive that cooking in high-temperature steam can do that, but that is the magic of using high pressure.

Of course, there is also the juice that is left behind in a pressure cooker when you are done using it. Due to the high pressure, what is usually a thin liquid turns into a sauce that is packed with flavor.

Are Any Nutrients Lost Or Destroyed When Using A Pressure Cooker?

So pressure cookers are convenient, safe and produce flavorful food, but is it healthy to use this cooking method?

Using a pressure cooker has several benefits when it comes to health and nutrition. First, because food has less contact with the water in the cooker, there is less nutrient loss to deal with. Much in the same sense that traditional steaming keeps nutrients from seeping into the cooking water, a pressure cooker further amplifies this benefit by also limiting the amount of steam that is escaping. 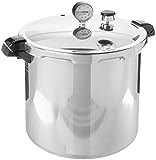 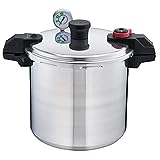 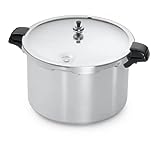